PROSPECTS OF SHIPREPAIR IN UKRAINE

Svetlana Shott, Marketing Director of the Smart Maritime Group, spoke to the Shipping magazine about the Ukrainian fleet development prospects. - At present, among all the inland waterways (IWW) of Ukraine, only the Dnieper (with restrictions) remains navigable. In 2019, almost 11.8 million tons of cargo were transported along the Dnieper, which is 19% more than the previous year. During the reporting period, the volume of grain shipments increased by more than 54% - up to 4.9 million tons. By the end of January-March 2020, freight traffic along the Dnieper reached 1.1 million tons. The rivers Southern Bug and Danube are being worked up, while there is a problem of shallow water. Currently, the river transport of Ukraine is shipping less than 1% of the country's freight traffic, railway - 21%, roadway - 78%. For comparison, 53% of IWW is transported in the USA and India, 43% in the Netherlands, and 31% in Brazil. According to various sources, the potential cargo base in the Dnieper region is approximately 70 million tons and up to 350 thousand TEU. But, in addition to the presence of a cargo base, in calculations and forecasting of the prospects for the growth of the fleet, it is necessary to take into account the infrastructure for the reorientation of cargo flows from "wheels" to "water". Thus, the development of the Ukrainian fleet of river and mixed "river-sea" navigation becomes a priority task.

It will be practically impossible to implement the European vector of the cargo fleet development without updating a new technical base. Even considering the replenishment of the fleet in recent years, the average age of transport vessels under the supervision of the Shipping Register of Ukraine is on average 35 years.

The main players in the Ukrainian market for the transportation of goods on rivers are currently Ukrrichflot JSSC, ARGO SC, Grain Transhipment, SH NIBULON, Asket Shipping, AgroVista, Enire, with only SH NIBULON is a complex operator - it transports its cargo by its own fleet, has its own terminals, as well as shipbuilding facilities. The rest of the companies have only their own fleet and terminals.

According to the State Statistics Service, the ship repair market in Ukraine in 2010-18. showed stable growth, except for an understandable "drawdown" in 2014. At the same time, 2019 as a whole repeated the results of the previous one, with a slight decrease. Moreover, for 2020, many experts and analysts predicted further growth. The main drivers of the dynamics of the ship repair and modernization market over the past 10 years: • obsolescence of the fleet - a 5-time drop in the volume of new-built vessels compared to the period of ten years ago; • the economic situation in the world forces shipowners to cut down expenses and try to extend the life of the existing fleet. At the same time, in 2020, due to the coronavirus pandemic, which only increased negative trends in commodity markets, the situation for the industry got worse significantly. Additional negative factors were:

1. Reducing the income of shipowners of the available for us dimension-type vessels for the following reasons: • transfer of grain exports from Russia to the deep-water ports of Novorossiysk; • recession in the metal products market and reduction in freight traffic; • reduction in the consumption of petroleum products as a result of the coronavirus pandemic; • lack of liquidity among shipowners due to reduced income and limited bank lending; • stopping and temporary decommissioning, first of all, old vessels with high operating costs; • Granting a deferral to shipowners for compulsory surveys for the period of quarantine, some shipowners have extended their certificates and postponed the dates of scheduled repairs to the second half of 2020.

2. Most of these factors are of a temporary nature, and we expect a recovery in demand for repairs in the end of 2020 – beginning of 2021.

3. The entry into force of new environmental requirements opens up opportunities for the eco-conversion of ships, in particular, the installation of ballast water treatment systems.

4. According to the State Statistics Service, the volume of products sold in the category of "ship repair and maintenance" in Ukraine in January-July 2020 decreased by 35% - up to UAH 584.3 million. 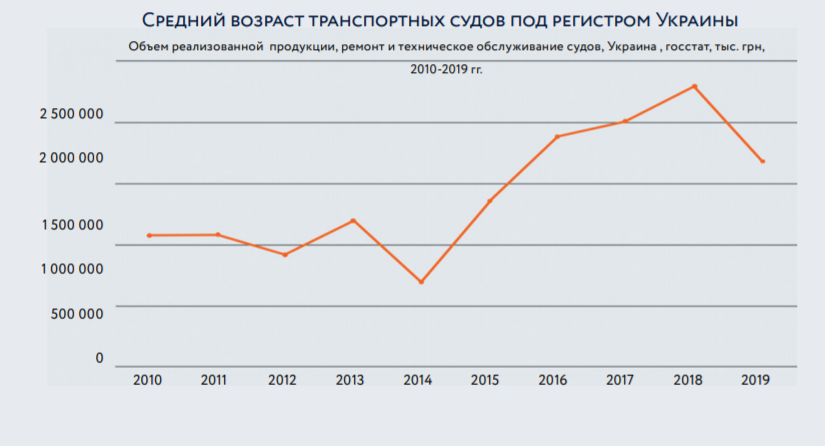 5. A significant drop in volumes forced shipyards to reduce the marginal profitability of repairs while fixing the current exchange rate of the hryvnia and providing long-term payment deferrals after the ship leaving of the shipyard upon completion of the repairs, which also created additional risks of income acquisition.

We have analyzed the merits and flaws of the domestic ship repair market. At the end of last year, the number of repair works of the main participants in the domestic market was: "Dunaisudoremont" (Izmail) - 35, Ilyichevsk Shipyard (Chernomorsk) - 84, "NIBULON" (Nikolaev) - 18, "Okean" (Nikolaev) - 16, " SMG "(Kherson) - 76. Each player has its own distinctive features and competitive advantages.

In general, Ukrainian enterprises have their own strengths and great potential:

• availability of own technical base; • accumulated experience and highly qualified technical staff; • geographical location - there is a large number of fleets concentrated in the region, the dimensions of which can be maintained by the shipyards located at the entrance to the Dnieper, Danube, an outlet to the sea; • presence of strong ties and long-term relationships with a number of customers; • availability of specialized educational institutions in the region for personnel training. The drivers for the development of the domestic shipbuilding industry can be: • modernization of the metallurgical industry in Ukraine and foreign countries; • increasing export potential; • strengthening of competitive positions in the segment of metal structures; • growth and development of river transport in Ukraine, as a result - an increase in orders for shipbuilding in Ukraine; • stimulating the growth of personnel training - excursions to enterprises of students of specialized educational institutions, increasing interest in the industry, promoting information about the prospects of the industry; • development of the E40 project (construction of a navigable route with a length of more than 2000 km, which is to be laid along the Vistula, Pripyat and Dnieper in order to connect the Baltic and Black seas); • development of the country's military fleet. 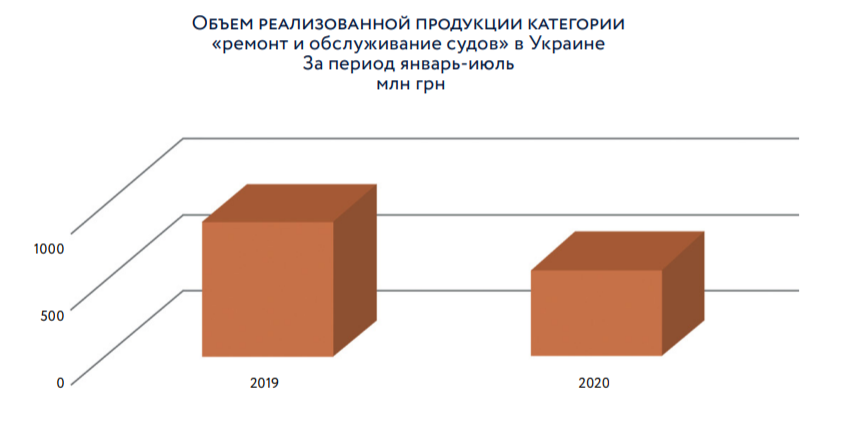 Weaknesses include: • outdated technologies, high wear of the equipment park; • high cost price; • insufficient competitiveness with shipyards of the Black Sea region countries; • narrow specialization of works with ferrous plate; • “expensive” financing; • aging of personnel; • lack of government support, financial programs, preferential customs and financial conditions; • lack of interest among young people in shipbuilding / ship repair education; • insufficiently strong instruments to provide guarantees for deferred payments by customers, which is dictated by the market. Possible threats to the development of Ukrainian ship repair and shipbuilding include the following factors: • complication of competitiveness in the world market due to constant dumping instruments of Asian countries, government support in Turkey and other countries of the shipbuilding industry; • global crises like "COVID" in 2020; • escalation of the military conflict.

What is the Black Sea basin ship repair market?

The Black Sea Basin ship repair market is mainly divided between Turkey, Bulgaria, Romania and Ukraine. The main competitor of Ukrainian ship repair enterprises is Turkey, whose shipyards have a clear benefits due to their advantageous location. Recently, the Bulgarian shipyards in Varna and Burgas have begun to work more actively. This is mainly due to loading with Russian orders, since Russian shipowners, due to high prices and tense political relations, refuse the services of Turkish and Ukrainian shipyards. Many shipowners refuse to consider ship repairs in Ukraine due to political risks. The tightening of control over ships flying the flag of the Russian Federation entering inland waters and the arrest of ships make it impossible for the normal continuation of cooperation with existing and new customers from the Russian Federation. 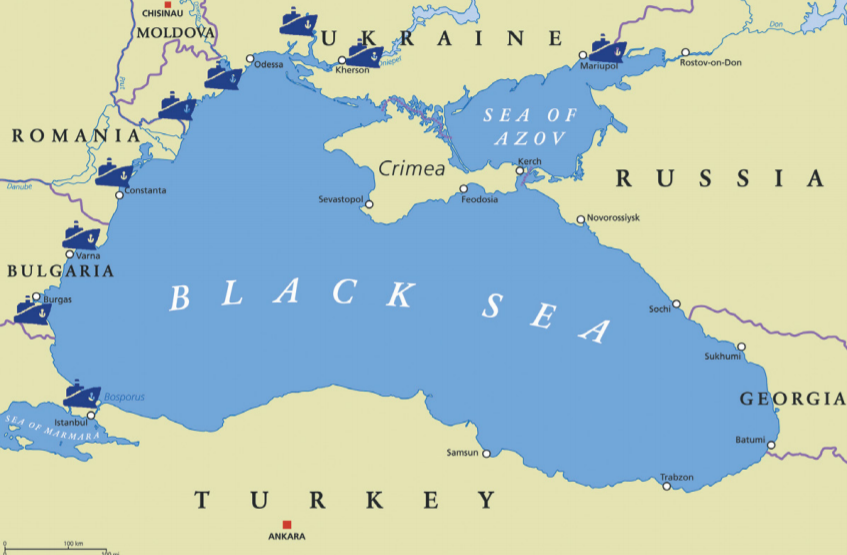 The period from November 2019 to March 2020 was difficult for river-sea ship owners operating in the Black Sea-Mediterranean region due to the lack of cargo and the corresponding decrease in freight rates. Many vessels have been laid up since February until the new grain marketing year (until July).

At the same time, considering the requirements for mandatory scheduled inspections and repairs, after the end of unfavorable conditions, taking into account the accumulating deferred demand, one can count on the recovery, and even growth, of the market. It is important at this point to maintain and, if possible, develop their competitive positions.

What are the prospects for the development of Ukrainian ship repair?

In Germany and Romania, comparable in territory with Ukraine, the share of the river transport segment is 13-27%. The long-term plans of the European Union provide that by 2040 at least 50% of goods transported over a distance of more than 300 km will be delivered by rail and inland waterways.

The most attractive is the delivery of goods from the Dnieper basin to the Danube basin or to the road transshipment complexes (RTC) of the Black Sea. The most efficient water transport today, considering the peculiarities of Ukrainian rivers and the characteristics of coastal sea routes, are tug/barge towing arrangement (TBTA) and articulated ships (AS) of mixed "river-sea" navigation (MN).

To ensure optimal performance and return on investment, it is necessary to design and build TBTA and AS specifically for the Ukrainian conditions. Another advantage is the possibility of using such a fleet as a temporary floating storage for grain. It is important to develop and create ships / trains of the maximum possible size for specific travel conditions, which ensures the highest efficiency in the transportation of bulk cargo. According to the conducted economic analysis, the payback period for new ships is 6-9 years, depending on various factors: freight rates, fuel costs, etc. The characteristic features of the current market situation are: an increase in shiploads when shipping grain cargo in the Russian market; reducing the need for medium and small-tonnage "river-sea" fleet and, as a consequence, the release of the fleet; low freight rates for medium and small-tonnage river-sea fleets and slow growth of freight rates in comparison with large-tonnage fleet; income decrease of shipowners of medium and small tonnage fleet, forced downtime or work at the cost limit; prolongation of repair terms, laying up, cost-cutting on repairs.

Two scenarios of the events are possible: either the current situation is of global nature and in the future there will be a continuation of the decrease in the ship repair market for the "river-sea" type fleet, or this is a seasonal situation and by the end of 2020 - in 2021 we will observe an increase in freight rates , the need for the fleet and, accordingly, the need to maintain ships in proper operational condition.