Nikolayev Shipyard is one of the largest shipbuilding companies in Ukraine focusing on naval shipbuilding. The shipyard was founded in 1897. Over its lifetime, the Company has built more than a thousand ships and vessels of various types and purposes. Nikolayev Shipyard is a well-equipped multi-discipline shipbuilding facility that can offer the serial production of vessels with a displacement of up to 120,000 tonnes.

Nikolayev Shipyard has vast experience in the construction of naval ships in the Azov-Black Sea region. In December 2009, the shipyard won a tender for the construction of a series of 10 corvette class ships for the Naval Forces of the Ministry of Defence of Ukraine. The total amount of the contract until 2026 is over $ 2.5 billion. It is the largest defence order of the Naval Forces in the history of independent Ukraine. The capacities of the Company also enable it to carry out projects in the field of commercial shipbuilding. 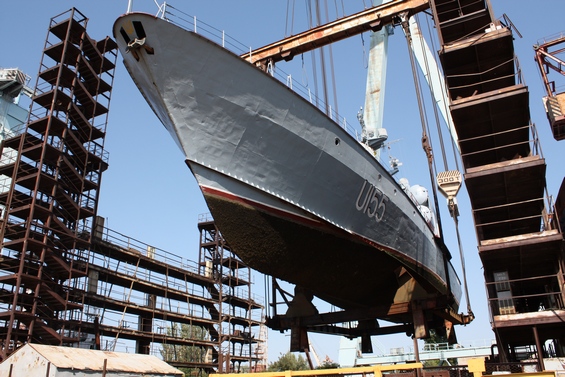 On straightening site metal is shotblasted to SA 2½ as per Swedish standard by shotblasting and painting installation.

Transportation of semi-products and parts between production sites is done by means of roller beds and crane equipment of 2-20 tons lifting capacity.

Capacity of the available equipment provides for processing of about 40 000 tons of metal per year.

The workshop performs assembly of details, parts, flat and volume sections for ships under construction. The workshop consists of two buildings with 4 and 3 bays.

4-bay building with area of 12 000 sq.m. is equipped with welded framing, bottom framing and non-typical flat sections fabrication lines. Workshop bays are equipped with 30-80 TLC cranes allowing for production of sections weighing from 30 to 120 tons. Sections are transported by rail.

In 3-bay building with area of 18 000 sq.m. there is a flat section 16х16 m fabrication site. The other two bays are used for fabrication of volume large-size sections. All bays are equipped with 100 TLC cranes allowing for production of sections with maximum dimension 32х16х7,5 m and weight up to 180 kg.

Sections from workshop to paint chamber, to slipways and SLP are transported by MAFI truck trailer 350 TLC and yard’s railway transport.

The capacity of the workshop with the available equipment is 30 000 tons of processed metal per year.

Slipway «0» is intended for construction of vessels up to 100 000 tons deadweight and has the following main particulars:
Overall dimension 330х40 m.
Launching weight of ships – up to 25000 tons
The Slipway is equipped with two gantry cranes 900 TLC each. It is possible to mount and assemble sections of up to 1460 tons weight on a heavy-duty near-slipway slab.

Slipway «1» is intended for construction of vessels up to 45 000 tons deadweight and has the following main particulars:
Overall dimension 290х33 m.
Launching weight of ships – up to 10000 tons.

Fabricates and mounts systems and items of steel, copper, copper-nickel, bimetal, stainless steel and other pipes.

The workshop comprises a closed type floating facility with sliding roof, located in way of slipway «0», which is involved into complete assembly of main engines of up to 500 tons weight with further loading on board ships being under construction on this slipway. Engine is loaded by use of cranes 900 TLC.

Performs outfitting and equipment of vessels under construction and repair on slipways and afloat alongside the building berths. There are three building berths in the workshop.

There is a special test bench for testing main engines and propulsion test, capacity up to 12000÷14000 kW.

The available production facilities and areas of outfitting workshops provide for outfitting and delivery of vessels with aggregate deadweight up to 100 000 tons per year.

Sections and small size hulls are painted in painting chamber (120х24 m). Large ships are painted with use of mobile apparatus directly on production positions.

The chamber is furnished with modern cleaning and painting equipment produced in Germany, Sweden and USA. Sections are transported into the painting chamber both with internal yard’s railway transport and by MAFI ship trolley.

The aggregate annual painted surface with regard to painting of vessels on slipways and building berths comes to about 520 000 – 540 000 sq.m.

SLP is intended for series construction of vessels up to 9000 tons DWT.

In separately located buildings there are insulation, carpenter’s and outfitting production sites.

The available crane equipment containing 9 units of 22-200 TLC allows to perform cargo handling operations with hull structures and equipment weighing up to 200 tons and height of lift up to 15 m.

Ships are formed on ship-carrying trolleys, moved with the help of capstan in production positions and to floating dock for launching.

Floating dock with pontoon deck sizes of 120x40 m provides for docking of floating facilities weighing up to 9000 tons (during ship repair and modernization).

Commencement of construction of shipbuilding, casting and mechanical plant named Anonymous Society of Shipbuilding, Casting and Mechanical Plants in Nikolaev City. Naval’ for short, informally the enterprise was also called the French Plant.
Conclusion of a contract for manufacture and mounting of main steam engines, boilers and cannon-towers for battleships IOAN ZLATOUST, EVSTAFIY and cruiser KAGUL, constructed at the yard of Nikolaev Admiralty. Since this event the yard became the main machine-building base for shipyards of the country’s South.
July: Keel Laying of torpedo boat destroyer ZAVETNY. She was delivered to the Black Sea Fleet in 1903. Destroyers ZAVIDNY, ZADORNY, ZVONKY and ZORKY were built within the period from 1903 till 1905.
The introduction of pre-production planning of shipbuilding and procurement on the technological basis through the use of planning and accounting units of technological sets and stages.
Introduction of UltraSonic Testing. Introduction of sites and workshops’ subject specialization for construction of single unit and small series vessels.
Construction of CO2 station and gas supply over pipes to workshops.
Replacement of continuous external scaffold with local cherry pickers, cradles etc.
Opening of the Yard’s Palace of Culture and Technics.
Establishment of In-house Construction department.
Construction of building and establishment of the Yard’s Training School.
Construction of the new hull production workshop (No. 17)
Mykolayiv shipyard SMG signed a contract with Greek company Avin International SA for construction of three tankers.
June: Mykolaiv Shipyard SMG was visited by Prime-Minister of Ukraine L.Kuchma and Chairman of the Council of Minister of RF V.Chernomyrdin. They attended heavy aircraft carrier VARYAG.
July: In Krylov Street a new showroom NAVAL’ was opened. It sold consumer goods manufactured by Production Enterprise CSY.
A new modern building was opened In Koblevo in Yard’s recreation centre. The building can accommodate 250 workers of the yard and their family members during one session.
The enterprise let on lease its facilities for subcontractors, involved in shiprepair. A bit more than 2000 employees (mainly administrative staff) left out of 40000. Alexander M.Sagajdakov (former director of Joint Stock Company Nikolaev Small Shipbuilding Yard) was appointed the Director for a short period of time.

Image gallery of the enterprise

The Enterprise, its structural divisions and technological processes are certified and have certificates of classification societies – IACS Members (International Association of Classification Societies).

As a large production enterprise Smart Maritime Group LLC constantly cares about environmental protection. Protection of the natural environment is one of the leading priorities in the enterprise activities. LLC SMG management team not only strictly observes the Laws of Ukraine and other regulatory legal acts on environment protection but also undertakes additional responsibilities on improvement of environmental situation in the region and minimization of impact of harmful production factors on the environment. LLC SMG conducts its business with permit for emission by stationary sources of ambient air contamination and special water use permit. According to the taken inventory of stationary sources of ambient air contamination LLC SMG belongs to the third group of enterprises, which are not required to undergo registration as facilities which have or may have unfavorable effect upon public health or state of the ambient air. Production waste or domestic solid waste is handed over by the enterprise in compliance with the signed agreements to economic entities which possess the corresponding permits and licenses related to waste treatment.

The administrative staff of the enterprise on a regular basis provides for training of the personnel, which implements hazardous work (work with bottles, gas, crane and machinery operation). Training is conducted only in specialized training organizations in Kherson and Kiev.